Do you know the Malaga Film Festival?

This twenty one edition returns back to Malaga, the most attending event by the real film buffs: the Malaga Film Festival that, by its programme and show has little or nothing to envy compared to the elder brothers of Europe, such as the Cannes Film Festival, the Berlin Festival or the International exhibition of cinematographic art in Venice.

Make a note in your agenda of the dates: this year the Malaga Film Festival (https://onspainschool.com/malaga-film-festival/) rolls out the red carpet in the week from 13 to 22 April 2018. The OnSpain team, our Spanish language school in Malaga, will be there with you front row looking for all the VIP actors.

Since 1998, in each edition it has maintained its objectives to help the dissemination and promotion of the Spanish cinema, after collecting different sectors of the film industry for years and years on forums, debates and meeting points to analyse and evaluate the developments of the Spanish cinema.

The Malaga Film Festival shows you the exhibition of unreleased feature films, short films and documentaries you can watch at the Spanish cinema, from meaningful events such as Mercadoc, Spanish or Ibero-Amerian Documentary, Malaga screening, TV market and many more other events which you can find on the official website of the Malaga Film Festival.

Have you looked at the poster for this year? Behind the printed heart 39 national films are hiding on the poster of the Malaga Film Festival. In the middle the classic Biznaga, the most important award of the festival, and all around distinctive elements connected to the Spanish cinema such as the suitcase of Pepe Isbert with the garrotte in “El Verdugo” (1963) or the megaphone of the Malagueña Dani Rovira in “Eight Basque surnames” (2014). Will you be able to connect other signs with other films? 😉

1_If you have time before you travel to Spain or enjoy some of the events organized by the festival; check out our list of the best Spanish films to learn Spanish.

It can be useful to improve your Spanish and to understand the humour of the Spanish cinema.

2_ If you come to or live in Spain you can also make a list of films that have been filmed in Malaga and in Andalusia and visit the places. You might like to know that very actual series, such as Game of Thrones or mythical fiction like Indiana Jones films picked these lands as a setting for its films.

3_ To avoid falling into linguistic slips that do not fit with the red carpet, refresh your Spanish with a language course during your stay in Malaga city. With our fantastic teachers of OnSpain you can decide the topics for your Spanish classes, and view the Malaga Film Festival … We don’t want you to have the coincidence you meet any famous characters and miss words in front of Antonio Banderas himself. 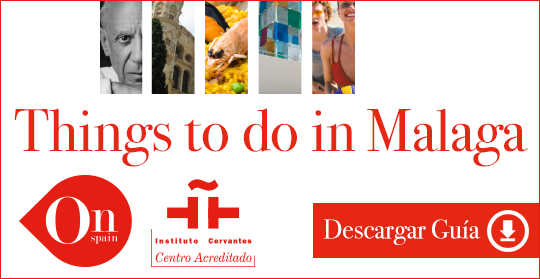